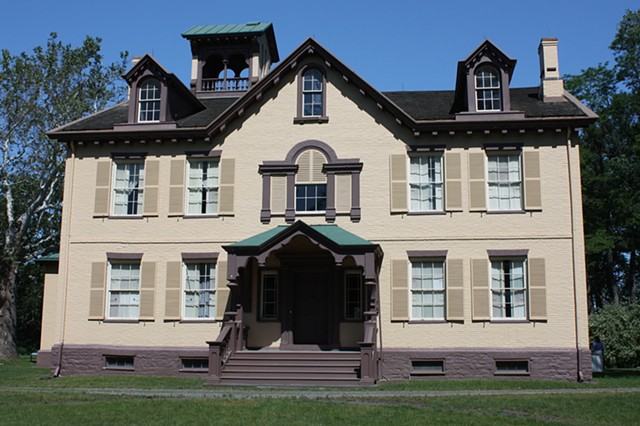 , I arrived at Martin Van Buren National Historic Park just before 9am – perfect timing, since the first tour of the house would leave at 9. The day was warm already, but not quite the stifling heat of the first day. I sat on a bench outside the visitor center acquainting myself with Diane, the only other person who had appeared for the tour.

I regret that I did not make note of the tour guide’s name. This is a shortcoming for all the parks I have visited thus far, and I must give a huge shout out to all the rangers and other park staff from the many parks that have become stops in my journey this year. They have helped make my project – and my experiences – a resounding success. I do know that in addition to being a Van Buren tour guide, he is an English literature professor.

At any rate, I must say that Martin Van Buren is a little-taught president. In fact, I recall learning absolutely nothing about him in school, although perhaps that is my faulty memory regarding social studies – my least favorite subject as a child – rather than an artifact of the curriculum. I did remember, from my trip to the LBJ Presidential Library, that Martin Van Buren was one of at least three presidents who were not married during their tenure in office (Jefferson and Chester Arthur being the others).

Important fact number one: our eighth president, Martin Van Buren, although of Dutch descent, was the first president born a citizen of the United States. All prior presidents were born during the colonial period.

Important fact number two: Van Buren was an attorney, but never went to law school. In fact, his formal education was quite limited. At age 13, he left school due to family finances, but his mother arranged for him to “read law” with a local attorney and at age 21, he passed the bar. Important fact number three: Martin Van Buren loved technology. Relative to the time in which each president lived, he was perhaps the most technologically savvy president. He had a coffee maker. Sure, it was not a Keurig, but a 2-chamber contraption the produced his daily cups of coffee. He had a precursor to running water. A hand pump was still required, but the water was pumped into a holding tub which could then be run into a sink or tub via a faucet. (Interesting side-fact: Martin Van Buren bathed every day, an unusual habit in the 1800s.) Martin Van Buren had a flush toilet! It was not plumbed, however. It was a wooden throne, if you will, with a hole over a bowl. You pushed a button to empty the bowl. Oh, you ask, what was the bowl made of? Wedgewood china, of course.

Important fact number four: In this, a hotly contested presidential election year, with lots of mudslinging, it was interesting to learn that smear campaigns are not a modern invention. The newspapers during Van Buren’s campaigns were full of political cartoons that smeared the opposing candidates.