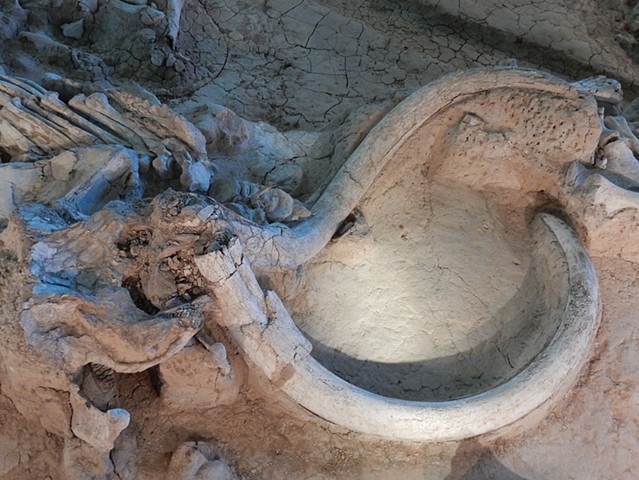 The fact that I arrived in Texas at all was a near miracle – and one I might come to regret. Flying out ahead of a blizzard, I departed Maryland at 6:40am, just hours before all the airports in the region closed. They wouldn’t reopen for days. But the weather forecast for Texas was largely sunny, highs in the 60s. Life was good, and I, for one, would not miss the winter wonderland that my home would become. I could live very well for a week without seeing any ice.

The impending storm forced me to fly out for a business trip to Austin on a Friday, leaving me with a free weekend in Texas on the boss’s dime. And what better way to spend my time than a visit to Waco Mammoth National Monument, a relatively new National Park site that preserves in situ mammoth fossils.

Saturday morning, at o’dark-thirty, I grabbed an apple from the fruit bin in the hotel lobby and headed out into the blackness of pre-dawn Texas. As dawn began to color the sky, I drove I-35 north through Anywhere, USA. McDonald’s. Cracker Barrel. Home Depot.

Austin had been cool when I left, but in Waco frost painted the grass, in crystals so well defined they looked like the paper snowflakes of my childhood.

The ranger stopped partway down the short path toward the dig shelter, pointing to the plants growing in the open spaces of the field between the trees. Their entire stems were encased in ice vases. As anxious as I was to see the mammoth skeletons, I couldn’t stop taking photos of the iced-over plants.

A large nursery herd of Columbian mammoths, the ranger explained, had grazed this area and was killed in a flood. The first evidence surfaced in the 1970s when two teenagers found a femur bone. Many of the skeletons had been excavated and brought to Baylor University. But several remained at this site, and a building was constructed around them to protect them. His descriptions, and my advance reading, did not prepare me for the dig site.

The skeletons lay in situ – partially exposed but still encased in the ground. A complete bull with impressive tusks lay directly in front of us. Enormous, imposing, yet fragile lying in death, his bones were criss-crossed with fractures, his legs askance, his ribs compressed upon each other. A nearly complete female skeleton lay on the far side of the small site, one tusk sharply shorter than the other, her massive teeth exposed. Other partial skeletons, all neatly labeled, stretched before us.

At some point, the ranger said, as we stood on the raised walkway over the burial site, excavation will begin on these remaining skeletons. In a sense, that made me sad. This magnificent sight would no longer be preserved in this way, with the skeletons in situ, in the positions where they died. But I had to ask my question: “Who will do the excavation?” The answer: “Researchers, paleontologists, and volunteers.”