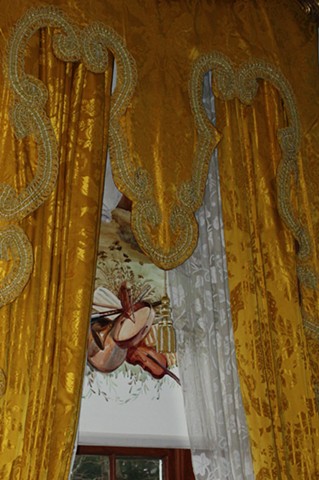 The Hampton National Historic site sits on a fraction of its original land in Baltimore County. What remains is preserved by the National Park Service and is dominated by the windowed cream-colored mansion that served as the Ridgely family’s summer home for 150 years, whose second Master was an early governor of Maryland. The three-story mansion is topped by a cupola, to allow the summer heat to escape the interior of the house. From the front lawn, the lower buildings are visible down the hillside: the stone buildings that comprise the horse barn and mule barn, the dairy, all designed – including the slave quarters – to remind the third Mistress of the European architecture she loved from her trips to France. The gardens, largely dormant this early in the season, stretched beyond the house. A lone magnolia tree added color to the grayness of the sky and bare trees.

Each time I visit a park I’ve visited before, I try to do or learn something different from the prior visit(s). This was true when I returned to Joshua Tree National Park a year after my residency there. I went at a slightly different season, saw different kinds of blooms, hiked different parts of the park. And so it was on this, my third visit to what I believe is the closest national park property to my home: Hampton.

On my two prior visits, I took the mansion tour. Today, a cold first day of spring with flurries dotting the sky, I attended the program Servitude at Hampton: In Black and White presented by Park Ranger Anokwale. The mansion tour presents the history of this opulent Baltimore County Revolutionary War era plantation from the perspective of the Masters and Mistresses of the mansion. Anokwale provided a cultural and historical education from the perspective of the servants who “toiled to make the Ridgleys’ lavish lifestyle possible.”

While the tour embarked from inside the mansion, a stunning renovated home larger than both Mount Vernon and Monticello combined, our education began in the orangery, itself a fine example of the lifestyles of the rich and famous in the early years of our nation: most Americans of the era would never have the opportunity to eat oranges, yet the residents of Hampton not only at them, they ate them year-round, due to a greenhouse effect created in the orangery by slaves stoking wood into a furnace that generated steam in the terra cotta pipes under the orangery floor. Anokwale asked us to reconsider our use of the word slaves: by saying enslaved people instead emphasizes that they were forced into servitude. That’s a concept I will weave into our Passover seders this year as well.

Between stories of runaway African American enslaved people; of European indentured servants dying, in majority, before their period of indenture ever ended; of the use of neck irons as a means of punishment; of lists of gifts the Ridgely family gave to the enslaved children on Christmas; Anokwale continued to introduce us to corrected terminology. The slaves freed by a clause in the will of the third Master were released by manumission; emancipation is the concept of freeing people from slavery by government edict as opposed to personal choice. She emphasized that while common folklore says that the family freed most of its slaves, they really only freed men ages 28 to 45, and women ages 25 to 45. The elderly – as 45 years of age was considered at that time – remained to be cared for by the system that broke them (enslavers), the young adults kept to produce more enslaved children for the plantation, and in the end, the families became split as a result of the age division in the manumission clause.

I saw each room of the mansion in a new light. Instead of only seeing the children’s toys scattered in the parlor, I saw the Christmas present lists that showed certain slaves “too bad” to receive presents in any given year. I saw – and held – the ironwork chains, produced at the family’s iron foundry, that bound the slaves together as they were marched to auction. The weight in my hands was ponderous; I couldn’t imagine bearing them around my neck.

Oppression and opulence walked hand-in-hand in this journey back through time, and the notion that it took, during banner years, over 300 enslaved people to run this home, dominated by beauty to excess, is staggering, sobering.