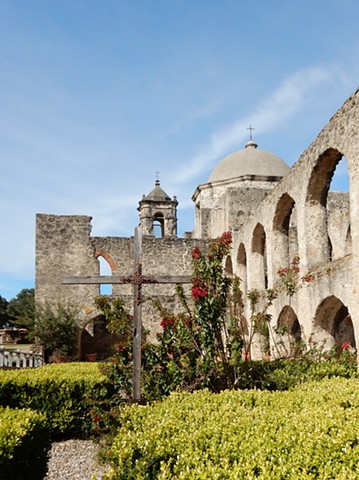 An afterthought – sometimes it can be an insignificant event, or it can be the unexpected icing on the cake.

I had not considered going to the San Antonio Missions park ahead of time. It was another trek from Austin, and I hadn’t realized it was close enough for a half-day trip until the day was upon me. The last day of my business trip ended early, mid-day, and I found myself on the road to San Antonio. Missions interest me. Perhaps not in a good way. They make me angry. Their point, at least partially, was to decimate the Native American populations where they set up shop.

I’d done a bit of mission-visiting when my son Scott and I drove the California coast from San Diego to San Francisco in 2007, with our overnight stop in San Luis Obispo. The building housing the San Luis Obispo mission was now a church, with a museum and gift shop attached. The Indian artwork gave way to Spanish influences, lacy shawls, and ultimately to religious works. The verse on the plaques showed no remorse at conquering the Indians to submission, proclaiming surprise at discovering the Native Americans possessed moderate intellectual capacity.

I encountered the mission issue again in my Artist-in-Residence project at Joshua Tree National Park. The book As the Padres Saw Them: California Indian Life and Customs as Reported by the Franciscan Missionaries 1813-1815 depicted the Native Americans as portrayed at San Luis Obispo: of minimal intelligence.

Hence I approached the San Antonio Missions park with skepticism.

I fell in love with it immediately. The visitor center film, Gente de Razón, told from the perspective of the Native Americans, who had lost their voice, their identity, their peoples, kept me clenching my hands and my jaw. It was personal, and it was tragic.

Distracted, I wandered through the gate into Mission San José. I found myself at the opposite end of a large courtyard from the church. It was, in fact, a small village, isolated from the rest of the world. I had not expected it to be so very beautiful. The restored stone ruins rose around the landscaped courtyard filled with one-off flora from my Joshua Tree tenure: yuccas, cacti. I roamed past the living flats, in and out of the castle-like construct of the archways adjacent to the church, with the sun on my face and the wind in my hair. Closer and closer I crept to the church, and once there, I spent barely a minute inside. It was too disturbing, conceptually, and I needed the tranquility of the outdoors. But as I exited the building and turned the corner, I noticed something odd about the façade: it was not fully stone. Broken portions of faded colorful tiles remained on one exterior wall, blue, pink, white.

Time was elusive here, and I flitted back and forth between anger at the oppression of the conquered people, and admiration for the beauty of the structure and the grounds.