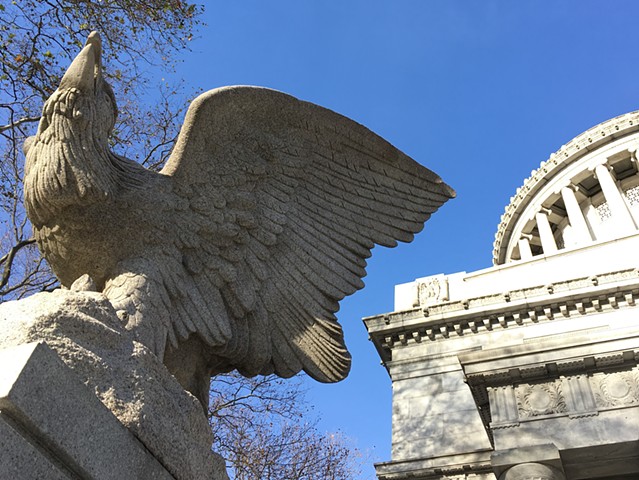 Initially, the plan was to start at Fort McHenry, my most often visited National Park Service site. It’s the location of important memories: scout trips with the boys, a means of introducing foreign visitors to Baltimore, the place where I met Arthur. But after I accidentally visited the Eric Canalway National Heritage Area, I decided that I would end my Centennial Parks Odyssey at Fort McHenry. Alas, this did not work out either.

Having yet one more day in New York City after visiting Theodore Roosevelt’s Birthplace, Arthur and I, who were both suffering minor foot injuries, decided to do a ridiculously touristy thing for two native New Yorkers: ride the double-decker bus. We hopped onto the downtown loop near our hotel in the wholesale floral district, and watched familiar sights like the Empire State Building from the open-air top of the bus. But as we got further downtown, while some sights were still familiar – such as the Brooklyn Bridge – we found ourselves looking at parts of the city we didn’t frequent, with fresh eyes. We looped around past Castle Clinton (which I did not include in my parks count since we didn’t actually visit it, we just saw it as we rode by), and past the World Trade Center Memorial. The site had changed a lot since I went to Ground Zero shortly after 9-11. The city began to look like itself again as we approached Madison Square Garden and the whole of midtown.

At 57th Street we switched to the uptown loop. This is where things started to get really tricky. The first stretch was still my good old New York City, with the M&M store, the lower end of Central Park, Lincoln Center, the Museum of Natural History.

Then I started to get itchy. I was sitting on the literal edge of my seat, not so much listening to the commentary anymore, but studying the map. Because coming up, very shortly, was General Grant’s Tomb. On the one hand, I wanted to pass it by, to stick to my plan that my journey would end with the 100th park at Fort McHenry. But I’d never been to Grant’s Tomb, I was an inadvertent tourist in the city of my birth, and … well … sometimes you just have to be opportunistic. We hopped off at Grant’s Tomb. I couldn’t help myself.

You can’t miss the building. It looks like a memorial, a mausoleum, and I was prepared for that. Let’s not kid ourselves. I knew what all these parks looked like, at least on the surface, just from frequenting the websites. But there was an aspect of General Grant’s Tomb that I had not anticipated, before we even approached the building. It’s surrounded on three sides by mosaic benches. Completely surrounded by mosaic benches.

Slightly hobbled, I ran past the benches, up onto the steps leading up to the entrance, an threw my arms wide. One-hundred parks. It seemed unreal. I almost wanted to sit down on the steps, just sit and take it in, to let the thoughts swirl around my head uncontained, without having the put forth the effort to stand, to walk, to talk. But of course I had to go inside.

I photographed everything – the paintings, the marble wall of the rotunda, the map of Grant’s battle victories, the flags, the tombs (with utmost reverence). I touched whatever I was allowed to. Once outside again, I began to examine the benches. Each was a different motif. Of course, I touched them all, the mosaic stones cold against my fingertips. When I reached the bench with the National Parks theme, I sat, and I reflected. Oddly, I felt tired, a whole year’s worth of tired. It had been an exhilarating, but exhausting, project.

Truly, this was the end. It was December already, and I knew I might not make it to another park by year’s end. I had been on an amazing journey, an exhilarating, exhausting journey spanning 12 months, fourteen states plus the District of Columbia, and over 34,000 miles.