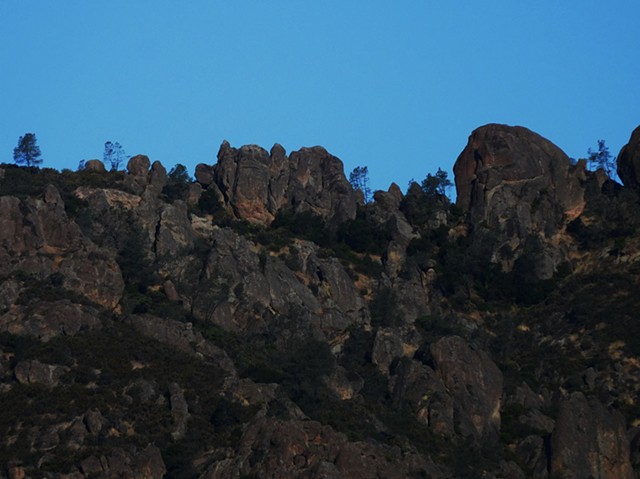 Sandwiched between a weekend in Chicago visiting my son and daughter-in-law, and a weekend in upstate New York visiting my nephew, niece-in-law, and their new baby, I found myself on a last minute business trip to San Jose. Following three very long work days, I had a half day free before my flight home. The night before, at dinner with my west coast cousins, I mentioned that I planned to visit Rosie the Riveter and Muir Woods. “Bad idea,” they told me, “because traffic headed north from San Jose will be impossible and rush hour starts much earlier than you think.” I was crushed. I’ve tried to visit at least one park everywhere I’ve traveled. “Go to Pinnacles,” they told me. It seemed to me that when I looked at the parks in California, Pinnacles was further away than the other two. But my cousins assured me I would hit no traffic heading south.

At 5:30am I checked out of the hotel and started driving south. Heavy, sleepy, rolling clouds descended from the sky to shroud the mountains in a hovering mist. The further away from San Jose I got, the more beautiful the scenery became. I thought it would not be possible for the park to be any more beautiful than the drive to get there. The hills looked soft, velvet coated, and the interplay of sun and clouds colored them gold. Cows dotted the landscape, along with cherry trees, curvy roads, long stretches of western utopia.

The park was quiet. No other cars drove in ahead of or behind me. The sign on the visitor center proclaimed “closed.” I drove on to the first of few stops in the eastern portion of the park (which does not connect to the western portion).