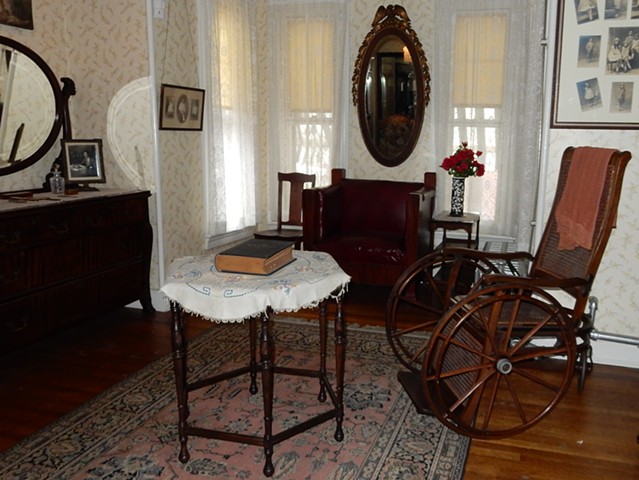 I must confess I knew little about Maggie Walker prior to my visit. While I normally plan trips (even day trips) to an excruciating level of detail, I wanted this National Parks odyssey to be experiential. Hence I didn’t want to do extensive research on the parks prior to my arrival; I wanted to learn about them through the media, exhibits, tours and hikes at the property.

Maggie Walker’s story was told by a ranger via a tour of the house. Up front, he explained that Maggie had been the first black woman president of a bank in the United States. Her parlor walls held portraits that could be considered a who’s who among the black leaders in our country’s history. Booker T. Washington. A massive wooden bookcase contained volume after volume of books. The dining room table was set with her original china and silver. The ranger made a specific point of saying that the grandchildren recalled not being allowed in the dining room except for special family holiday dinners. I chuckled at this because it was a rule from my own childhood. The kitchen contains the original stove from when Maggie bought the house. I noted another memory from my childhood – a meat grinder clamped to the kitchen counter.

Maggie added a laundry room to the house, among other additions during her lifetime. It was, the ranger pointed out, quite a luxury at the time to have indoor plumbing (although the laundry was still washed by hand). The room boasted three sinks, a stove to heat the iron, and a massive pressing machine that would be worth the equivalent of a few thousand dollars today.

As Maggie aged and became wheelchair-bound due to diabetes, she had a hand-elevator installed in the house so that she could access her upstairs bedroom suite. To me, this was the sign of luxury in the house – the installation of the elevator itself, and the employ of a butler or chauffeur to operate the pulleys, by hand, to lift her to the second story.

After the tour, I watched the visitor center film. Most of it recapped what I had learned on the house tour. But perhaps the most fascinating tidbit was that when Maggie was a child, her mother earned a living as a laundress, and Maggie and her brother helped by fetching the heavy buckets of water required, and delivering the clean clothing back to the clients – who were wealthy enough to hire someone else to do their washing. This provided, to me, the nod to Maggie’s wealth – that she had grown from a young girl helping her mother shlep water for hired-out laundry, to having one of the early indoor plumbing laundry rooms.