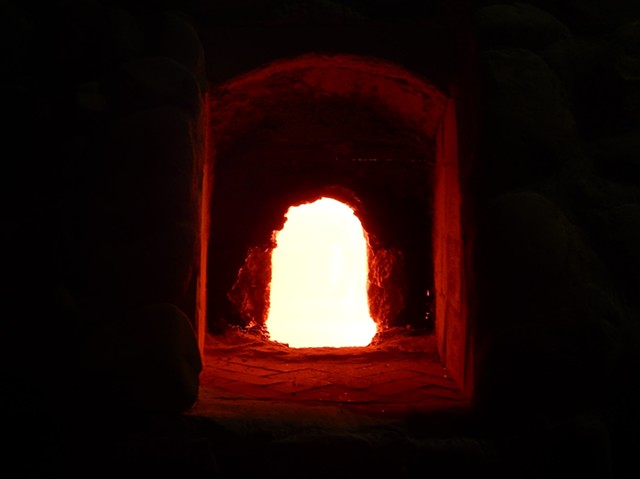 It was a two-jacket day. The morning dawned grey, cold, raw, damp and windy, with the promise of heavy rain sporadically throughout the day. But I knew that my project, which by now had grown to the hopes of visiting 100 national park properties in the centennial year, pinned its hopes on being opportunistic, on taking advantage of parks in areas I happened to be. And today I would be driving home from Virginia Beach, with a plethora of park sites along the route.

So what’s a girl to do? Don a fleece and a raincoat, and focus more on the indoor aspects of parks if necessary.

Since I had visited this park years ago when my children were young, I sought out an aspect of the park that was different than the prior experience. I drove Colonial Parkway, stopping at the historic markers, reading about a failed settlement prior to Jamestown, and about unrest between the Native Americans and the new settlers. Rain had begun to fall in earnest, and thinking about the notion of wishing for better weather made me dwell a bit on the hardships of life in colonial times, and the role that weather played in an agricultural society. Birds were out in great numbers: ravens perching on every branch of a still bare tree, some kind of grand bird nestled in the rushes. The air was soft with the sound of the raindrops and the calls of the birds.

Approaching historic Jamestown, I pulled into the parking area for the Glasshouse. Archaeologic remains of the original glasshouse are ensconced in glass within a modern building; placards told the story of the early German settlers and their glassblowing art. A reconstructed Glasshouse has been built close to the site of the original; the entranceway set up as a shop filled with hand-blown glassware. Blue, green, and amber vases, candle-holders, bowls. Behind the shop, the oven burned hot, the orange glow of the heat visible in the openings of the stone dome. Today, they were making bowls, blowing, swirling the hot glass, shaping, separating the finished product from its rod, placing it in a cooling oven to bring it down to room temperature slowly. Tomorrow these bowls would be added to the shelves of the shop.

Driving back along Colonial Parkway, along the James River (originally the Powhatan River), I met a park ranger who told me that it’s almost certain, despite protests, that power lines will be installed across the James River at this location. I recalled the power lines set along the drive through the Florida Keys, and how stunning an image it produced at sunset. But I also understood the nature of Colonial Parkway as part of Colonial National Park, and the prospect of modern power lines ruining the serenity and colonial appearance of the site.

I left Colonial Parkway, and the issue of building power lines across the James River, behind me as I drove on toward Richmond, a gold mine of park properties. I had never loved driving the way I’ve learned to during this project, traveling the roads that link our parks together, experiencing, for a short time, the cities and towns of our country, from stretches of big box stores and strip malls looking like Anywhere U.S.A. to windy back roads, countryside, farms, old industrial sites.