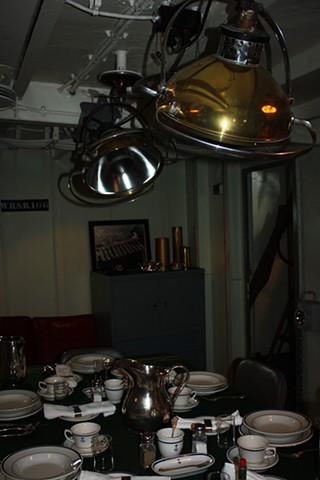 For me, six and a half hours is a long drive. That’s how long it would take for me to drive from my home just outside of Baltimore, to my nephew’s home in Queensbury, New York, to meet his newborn son. I knew I’d need to break the trip up a little. I stopped for lunch about 4 hours in, and an hour or so later I reached my via point: the USS Slater, a destroyer escort from WWII, docked in Albany, and part of the Hudson Valley National Heritage Area.

The day was hot, brutally so for this early in the season. The unofficial start of summer (Memorial Day weekend) was not the same as meteorological summer. Yet the heat and humidity were stifling on this holiday weekend. Still, I decided to tour the ship.

It is the only remaining afloat boat of its class in the United States. Having fulfilled its WWII duties, it became part of the Greek navy, before returning to the U.S. in the 1990s.